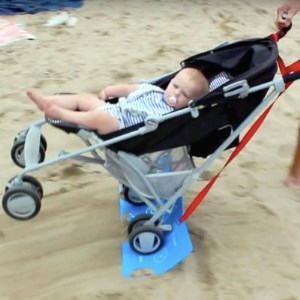 Exhibitors at Harrogate International Nursery Fair joined in celebration today as the Baby Products Association announced the winners of its 2018 industry awards.

The winner of the Concept & Innovation Awards was announced as Lee Cowan and Dean Mortimer of sandsliders. The judges were impressed with the simple, yet clever product to allow a pushchair to travel across unstable ground such as sand and gravel. The award was presented by Sara Ludlam of 3Volution which sponsors the Concept & Innovation Awards each year. The two runners up were Charlotte Lonngren with Secure & Seen Playpen; and Anita Hill with Comfyse Cushy Cushion.