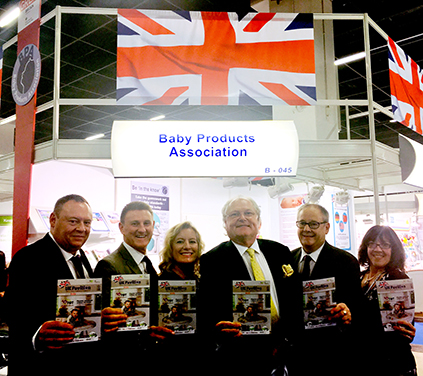 The Baby Products Association certainly upped its game in Cologne this year, as the UK Pavilion at Kind und Jugend was not only bigger and better than ever before; with more participants and eye-catching branding; but also attracted attention from Lords and Dragons too.

Touker Suleyman of BBC television’s Dragon’s Den spent several days in the UK Pavilion supporting current business interests and exploring opportunities to support new UK innovations. Lord Digby Jones of Birmingham who is a chairman of a number of businesses including On Logistics which is the UK distributor for Apramo; and also served as the UK’s Minister of State for Trade & Investment from 2007 to 2008, spent a day visiting the UK Pavilion and expressed his admiration for the exhibition area saying: “It’s incredible to see so many British companies together flying the flag. Seeing the prominent branding in the UK Pavilion – which is the focal point of the entire hall –  makes me feel proud to be British.”

This year, more than 70 companies participated in the UK Pavilion with every type of product possible for pregnancy and babies including toiletries and wipes, feeding and teething accessories, toys and furniture and of course strollers and car seats. The dedicated networking area in the centre of the Pavilion proved hugely popular, not only with exhibitors in the Pavilion, but encouraged international buyers to remain in the area to meet colleagues and enjoy refreshments.

Robert Anslow, managing director of the Baby Products Association, comments: “The UK Pavilion moved to a new location, Hall 4.1 of Koelnmesse this year and we were uncertain about how this would work for our members. However, it was noticeable that this area was busier than other halls at the show – to the point that several companies in Halls 10 and 11 have enquired about relocating to the UK Pavilion next year. Early feedback from our exhibitors indicate that 2017 was another very successful show.”