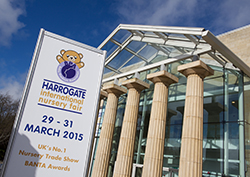 The doors closed on yet another successful Harrogate International Nursery Fair in March and, as the only UK’s only baby trade show with a track record of over 40 years, proved once again the highlight of the calendar year for the majority of the nursery sector.

Attendance was very good and consistent with other years with 19 countries visiting from as far afield as Iceland, Korea and Australia. Representatives from almost all of the major multiple retailers turned out in force including Mothercare, Kiddicare, Babys R Us, Amazon, Shop Direct, Boots, John Lewis and Marks and Spencer (to name a few); as well as large supermarket chains such as Asda, Costco, Tesco and Sainsburys. 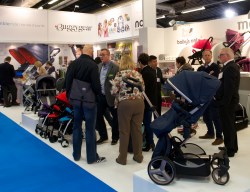 Savvy independent retailers also made the effort to support the show again and were able to enjoy exhibitor hospitality (which included everything from cupcakes to cocktails) as well as some generous show offers that some exhibitors had made available and attracted very good business. It was also great to see so many of these joining the fun side of the show with a good turnout at both BANTA Awards Dinner and also the After Show Drinks Reception.

Debbie Homer-Davis, managing director of BabyLady Ltd (nursery retailer) said: “We loved the show and the fact that there were less big suppliers meant we could spend more time with others in a relaxed and friendly way. We are very excited about the new DC collection at i-Candy and already there has been a buzz about this on our Facebook pages. New product of the show has to be the egg. Well done to all at Babystyle for what looks to be a winner. We have signed up with a number of new suppliers that we have not taken in before and we are looking forward to working with them. I also had time to attend the seminars and I particularly enjoyed the talk on social media.”

There was a boost in journalists attending Harrogate this year with almost 30 titles making use of the Press Office and number of mummy bloggers too. These included magazines such as B Baby; Bumps, Birth and Beyond; Prima Baby & Pregnancy; Angels & Urchins; Scrummie Mummies and Baby London, with Amy Thacker commenting: “The team at Baby London really enjoyed Harrogate. We discovered some fantastic new brands and products that we are looking forward to featuring moving forward and can’t wait to visit again next year.” 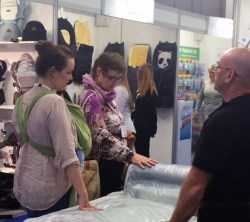 It was also notable that exhibitors with fresh new product ranges, attractive show offers and pro-active sales teams, who prepared well in advance for the event, really reaped the benefits of a slightly smaller show allowing more time to spend with quality buyers. Andy Crane, managing director of BabyStyle commented: “We had an amazing show – our best ever – with barely a minute to breathe on the stand; preshow we worked hard behind the scenes to secure appointments to see our new product egg.  We also made sure that we rewarded retailers for attending the show by giving some really attractive show offers. We made it clear on our newsletters that these offers were only available for show attendees.”

Richard Bamforth of DCUK Ltd said: “This year’s Harrogate show was very successful for DCUK. We saw over 85% of our existing customers and signed up some important new retailers. What was apparent is that retailers spent more quality time with us than in previous years allowing us to sell in new ranges in greater depth. Also, meetings were much better spaced across three days rather than having the usual Sunday rush.”

This opinion was reiterated by Paul Sirett of BeSafe Car Seats who said: “We had more visitors to our stand this year than last and certainly of a higher quality – all giving us a lot of their time and placing well thought through forward order plans.”The overall consensus for both regular exhibitors and those new to the show was a successful event and feedback was particularly positive in Hall H.

Lynda Harding of Sweet Dreamers, which has exhibited for a number of years, comments: “The team at Harrogate International Nursery Fair continue to provide an excellent show year after year. We had an amazing exhibition and were thrilled with the early excitement surrounding the launch of our new colour way – ewan the grey. The interest we experienced was incredible and we had orders flooding in ... we will certainly be kept busy for the foreseeable future.”

SEP Solutions, also located in Hall H, noted that having its Onni Smart Care baby monitoring system short-listed for the best new product category in the BANTA Awards piqued interest in its product and Satu Niemelä of the company said: “For a new supplier like us, Harrogate is great because it enables us to find and be found by key people in the industry. It’s efficient, it’s convenient and it’s valuable.”

Harrogate International Nursery Fair 2016 takes place from 20th to 22nd March, with exhibitor bookings opening in May 2015. More information can be found on the website at www.nurseryfair.com