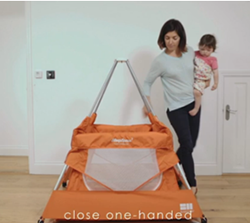 BPA member BabyHub recently exhibited at the Gadget Show Live as part of its prize for being chosen as a finalist for the British Inventors’ Project 2016. The company’s BabyHub SleepSpace travel cot received a fantastic response from the public which has led to new investment in its brand. BabyHub has spent a long time improving the product and expects to have it for sale in August this year.

Blogger Zoe from ‘Mama Geek’ chose the BabyHub SleepSpace as one of her favourite innovations at the Gadget Show, saying: “The BabyHub SleepSpace is a new (relatively lightweight) travel cot system that forms the base of a pyramid, so a mosquito net can easily be added and it also converts to a wigwam for daytime play.

“The company demonstrated how it goes up, collapses and changes into a play tent and it is all really quick and easy to do  – so if you were on holiday you could transform it easily from night time sleep to daytime play each morning without too much effort.”